I'm a newbie to the hobby of fish keeping. My husband and I are setting up a 75 gallon tank where we plan on keeping angelfish and other ciclids.

Currently I've been looking around for suggestions on heaters. We already have a filtration system set up and everything, we just need a heater. Problem is that I have been hearing both good things and bad about all the heaters I've been looking at. I know not everything is going to be foolproof but I would still like to get a quality heater that would be good for my tank and keep my fish at the comfortable 78 to 80 degrees.

Does anyone have any suggestions for heaters? Are there some out there that aren't as problematic as some of the ones I've been looking at (been reading horror stories surrounding the Visi Therms)? Thanks for anything you can suggest.
There is 1 comment on this entry. (Reply.)

Today I realized I could use my liquid-safe digital meat thermometer to measure the temperature in my new beta tank. It's certainly no less accurate than those sticker ones! And it's very convenient since new!fish tank sits on the counter sill.
There are 4 comments on this entry. (Reply.)

My river tank. It was intended to be a US native tank, but it's currently a mix of native and Asian fish. 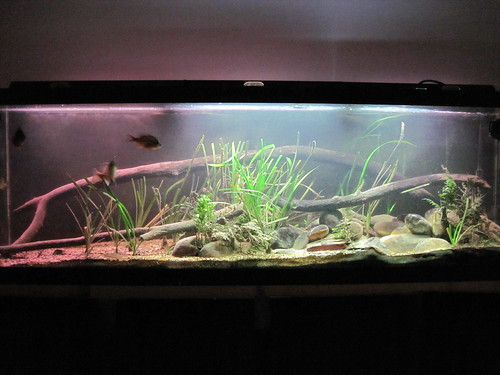 My local cichlid group is hosting the American Cichlid Association's Annual Meeting next year and this is their preview video. I thought it was pretty funny. Hope to see folks there!
There are no comments on this entry. (Reply.)

My brother in Michigan needs to sell his 135 and six piranhas. You can find more info here: http://bit.ly/bmshjg
There are no comments on this entry. (Reply.)

I have a large cold-water planted tank, and foolishly volunteered to look after my grandfather's fan tailed goldfish when he went into a nursing home (and yes, I know goldfish are horrible fish for tanks, but the only other option was flushing it). Most of the plants in there are hardy grassy plants which the fish ignore, but the goldfish completely destroyed all my marimo moss balls.

Can anyone advise on moss? I'd planned on getting some java moss, but not if it's going to be chewed up.
Mood::

curious
There are 6 comments on this entry. (Reply.)

Anyone interested in some? I have a mat of it I need to thin out in one of my aquariums. I've never had to flower in the aquarium, but it looks like it gets some pretty yellow flowers outside if you want to try it in a water garden this summer. I can ship to the US only.
There are no comments on this entry. (Reply.)

A LFS is going out of business and I picked up some of their odds and ends yesterday. These are a pair of giant shrimp they had in a planted tank. Apparently I saved them from being fed to the oscars at the end of the day. I don't know why you would do that, but I also am not surprised that they've been killing fish in the display tank. I guess if you're a store, that's a bad critter to keep around. Although if I were a store, I also wouldn't keep them with fish! There are a couple of reasons that place is going under. Anyway, the pictures under the cut will be large. I wasn't sure how friendly these two would be towards each other in tight quarters - they had been in a planted 55 and the biggest I could set up at short notice was a 20 - so they're in different tanks. One's definitely a male. The other I'm not quite sure if it's a female or immature male. No idea what species. I'm hoping it's not Macrobrachium rosenbergii as they get like 2 feet long (with claws). The difference in their markings makes me think the likelihood is low, but you never quite know with long-arm shrimp. 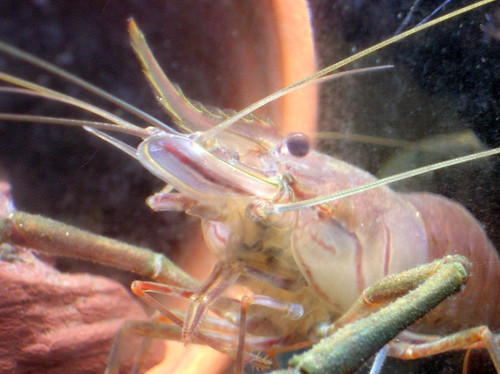 ( Giant shrimp pictures! )
There is 1 comment on this entry. (Reply.)

I found this really cool poster for you betta fans: Who's got stuff they're making or stuff they recommend?
There are no comments on this entry. (Reply.)

It's getting a bit thick in my water gardens and some of my small tanks and I'd like to thin it out. Most of it has been growing outside so it'll probably have snails and algae, but it also has interesting leaves and really long roots (great for raising fry in!).You can either treat it as an annual for outside or bring it in for the winter. It does best in tanks with bright light. Yours for shipping (just a couple of bucks) and I can only ship inside the US and I cannot ship this plant to California, sorry.
There are no comments on this entry. (Reply.)
←